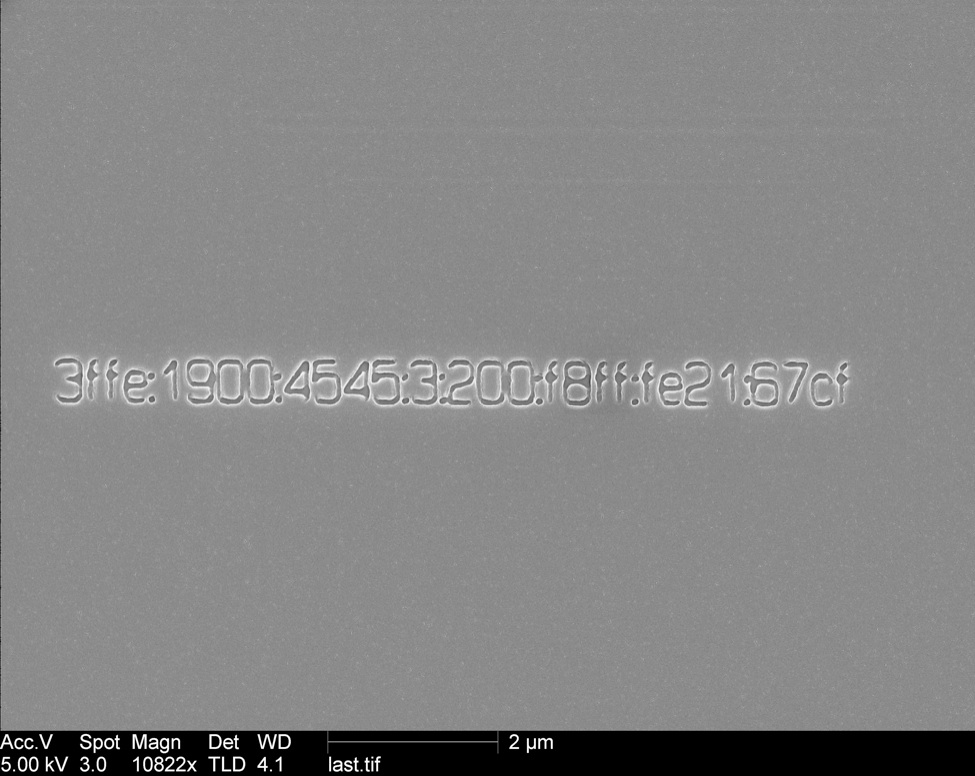 Deep Address. A sample Ipv6 addressed written  with an electron beam into a silicon wafer. It is 10 micrometers wide –the same size as red blood cell– and photographed with a scanning electron microscope.  The lines above are 50 nanometers in thickness. The creation of the image is collaboration between D:GP (The Center for Design and Geopolitics) and Nano3, both at Calit2, at University of California, San Diego. The image is part of D:GP’s Deep Address research project.  See www.designgeopolitics/projects/deep-address

What if your every blood cell could have its own internet address? What if everything in the world –all the way down to the scale of nanometers and up to the scale of human ideas and global cities– could directly exchange information, could communicate, as part of a massive universal addressing system?

Deep Address, a research initiative of The Center for Design and Geopolitics (D:GP), is exploring the technological and philosophical implications of new communication and addressing protocols, such as IPv6, and their implications for design at multiple scales.

An Iconic Image of  Invisible Scales
IPv6 Day, June 8, 2011, saw a world-wide testing of a switchover to IPv6 from IPv4 by global internet carriers and the large-scale transition to an addressing system that may change not only how the internet works, but also how we think about how the world itself works. As part of Deep Address, and to mark World IPv6 Day,  D:GP collaborated with Nano3, both Centers at Calit2, to produce an image to help communicate the scale of addressability implied by these platforms. D:GP directer, Benjamin H. Bratton,  an Associate Professor of Visual Arts at University of California, San Diego, explains, “the address in this image is 10 micrometers long. This is roughly the size of a human red blood cell. It is also about the same size as an average bacterium.  What if we assigned an address red blood cells, or to bacteria, or to cultural memes? What kinds of science and design would be suggested by that granularity of massive addressability? This is now close enough to the realm of real design that we need to think through the implications now.”  The scales involved are astounding, “one human hair is approximately 100 micrometers thick. This sample IPv6 address is written roughly 10 micrometers in width, or 1/50th that of a human hair, and .5 micrometers tall, or 1/200th that of a human hair. The lines of each character is 50 nanometers in width, and about 500 nanometers tall.  Bratton explains the math, “, 6.67 X 10^23 IPv6 addresses per square meter of the surface of the eürthhe,  or 6.67 x 10^17 per square millimeter, or 6.67 x 10^11 per square micrometer. As the address imaged above is roughly 10 micrometers in width, it could theoreticallly contain roughly one trillion different addresses.

An Internet of Haeccities
Bratton explains. “The rise of mathematical theories of communication in the middle of the 20th century made possible the emergence of planetary scale cyberinfrastructure across the scale of whole continents. With the discovery of DNA we began to understand that life itself is informational. We haven’t fully grasped the implications. With the Deep Address initiative,  we are interested in what kinds of design problems can be posed by thinking across such scales at once, from the intercontinental and the intercellular, if you like. Universal addressing platforms, like IPv6, are one way that the real movement of information between scales can be conceptualized and diagrammed.”

Bratton says the ultimate philosophical implications of Deep Address lead toward a “flat ontology” where both “things” and “ideas” are understood at the same level. “Addressable space includes not only discrete physical entities but also multiple levels of abstraction, as well as the traces of those entities, and even the ideas we then have about them.” He uses the example of a book and literary criticism to illustrate this point. “Think about the multiple scales of abstraction in a book. From very physical things like the molecules in ink, to an individual letter on a page, to a complete sentence, to more abstract things like a ‘scene’ or a ‘passage,’ or more complex textual forms, all why up to a complete book, to an intertextual link to another passage that is written about it, to someone else’s idea about that link, and all manner of layers that comprise the physical and cognitive intertextualities of a book or a historical body of texts, and so on. Each and every one of these could be given a real address so that real links between them could be clearly traced in different ways by different people for different purposes,  all of which in turn could also be addressed again.”

Instead of the  popular term, “the internet of things,” which implies a network of physical objects, Bratton prefers the more esoteric sounding, “internet of haeccities” which would include objects, but also concepts and memes, addressable at the same level, but at multiple scales, through the same system.  “Scales blur and what seemed solid becomes fuzzy. Inevitably we see that any apparently solid scale is really only a temporary state of resolution.” The bottom line, says Bratton: “the inherent intelligence of the world could be more self-reflexive in new and important ways.”

Address as a Creative Platform
Bratton says that while addressing schemes like IPv6 have to be centrally governed in order to universally connect unlike things, he hopes that the ultimate design space of deep address is more bottom-up ecology than a top-down structure. “We’ve seen hundreds of millions of people online in just the last few years, and its been tumultuous and messy, and there are no guarantees that all the outcomes will be good ones. We would like to think that the he unforeseeable effects of the world ‘waking up’ as billions and indeed trillions of ‘things’ come online, will be more positive than negative, but we can’t really know. That’s why critical design research projects like Deep Address are so important to anticipate what is possible.”

In fact, Bratton sees massively addressable spaces as not only a way to map and describe the world, but as a new kind of creative medium in its own right. “Literature has conceived of the politics of addresses in different ways. In Thomas Pynchon’s The Crying of Lot 49, the recent history of the world is re-told as a conspiracy of postal systems.  But we foresee massive addressability not only as a way to describe things by giving them a discrete number, but ultimately as a way to to compose and create lines of connection, association, and metaphor. It’s an authoring medium.  It’s not only a way to map the world, it’s a way to create a world, to create new concepts and logics of association between apparently unlike things, words, ideas, places;  just as an poet would with an alphabetic language. This would have implications not only for art and literature, but through them, for everything from climate science and urban planning to neuroscience and nanomedicine.  Ultimately, through massive addressability and deeply ubiquitous computing, these categories and disciplines may give way to new genres of knowledge we can’t yet imagine, but which may be crucial to our survival.”

This entry was posted in Uncategorized. Bookmark the permalink.